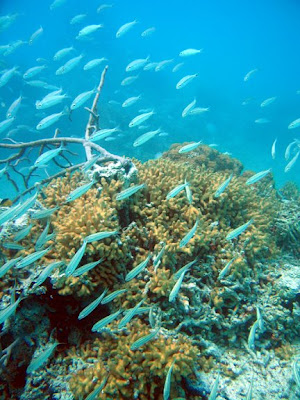 Went exploring a patch reef about 3 miles from shore, straight north of Tynes Bay last week, to show Ben Watson of LookBermuda the finger coral reefs. These reefs are totally different from the reefs in the outer lagoon and rim, in that they are mainly built by the finger corals of the genera Madracis. Some of these patch reefs can reach 30-ft tall, composed of a solid sheet of thousands of little coral fingers - presumably all one colony.

Tomtates, locally known as white grunts, thrive on the finger coral reefs, presumably because there are places to hide. The grunts also seem to think divers are just more reef as they will school around you when you are out there.


A broad view of a finger coral reef, with lots of wee grunts.


Also common at the base of these reefs are branching corals of the genera Oculina. The image below is of one of the rarer species, called Oculin…
Post a Comment
Read more
More posts