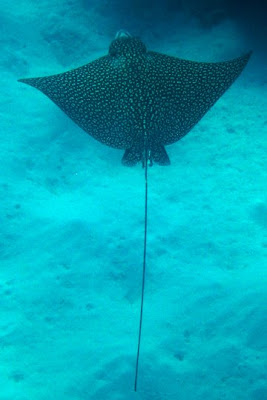 Studying Bermuda's Own Spotted Eagle RaysA BZS-supported graduate research project undertaken in 2006, 2007 and again this summer by Matt Ajemian, a student at the U. South Alabama, Marine Science Dept, and the Dauphin Island Sea Lab'sFisheries Lab
Project Context
The spotted eagle ray (Aetobatus narinari), locally known at the “Whip Moray”, is fairly abundant over seagrass beds and sand flats of Bermuda. The Government of Bermuda has expressed interest in placing spotted eagle rays on the Protected Species List – however insufficient information of their population status and ecology has prevented any such action. The urgency for A. narinari data has become critical as they are potential predators of conch and scallops, both of which are also undergoing restoration from overharvest in Bermuda. Rapid population increases of other rays in North America (Science journal pdf) demonstrate that rays can impact shellfisheries quickly - highlighting the need for understanding the ecolo…
Post a Comment
Read more
More posts