Competition for space between 2 corals 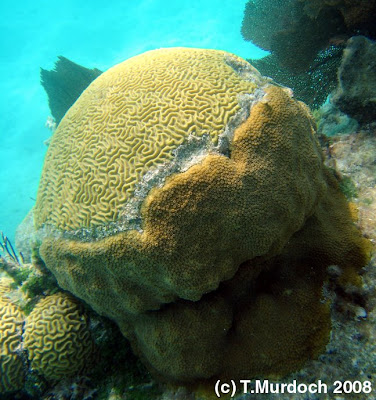 Hard corals compete for space on reefs with other benthic organisms, including other corals (e.g. Lang 1973, Logan 1984).

The photograph above shows a star coral (Montastraea frankesi) overgrowing a brain coral (Diploria strigosa) on a patch reef in the North Lagoon at 3-m depth. The star coral uses stinging tentacles at night to kill and eat the tissue of the brain coral, creating the gap of bare space along the edge between the two corals we can see in the photograph. The star coral then grows new polyps to cover the bare space.

Understanding how corals compete is important, as interactions between coral species are one of many factors that influence the number of species found on a coral reef, its overall rate of growth or erosion, and the availability of small holes for fish and other animals to hide in.
Lang, J. (1973). Interspecific aggression by scleractinian corals. 2. Why the race is not only to the swift. Bull. Mar. Sci. 23: 260-279Logan A. (1984) Inters…
Post a Comment
Read more
More posts