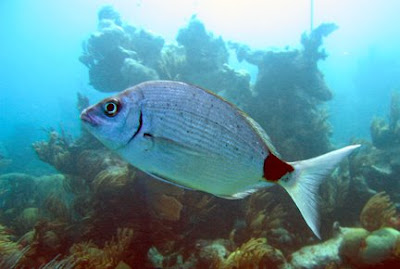 One may wonder why we would choose to name ourselves after the Bermuda Bream, considering some of the other, less pleasant names we Bermudians call the fish.

Well, there was the pragmatic reason that "Bream" started with a B - so we could start our name with "Bermuda"...

However, another draw was that the Bermuda Bream is actually an endemic fish, meaning it is a species found in Bermuda and no where else. Yep - our bream are ours alone, at least according to Caldwell (1965), who first stated this assertion. It' species name is Diplodus bermudensis.

That said, there are sister species found across the Atlantic, including one in the Mediterranean called the White Bream (Diplodus sargus sargus) which looks remarkably like our guy. I took a photo of the specimen below in the Monaco Aquarium a few weeks ago.


There are also bream over in the US and Caribbean, and down to South America, but with the much nicer name of Silver Porgy.