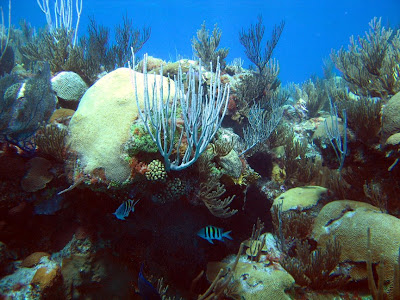 A view across the shallow rim reef. (c) T. Murdoch

Between the outer forereef and the inner lagoon of the Bermuda Platform lies the "Rim Reef" - which is only 5 ft deep in places and which forms the protective barrier that large waves break against.

Cutting through the rim in 30 to 40 places are deep cuts, or passes, that reach down to 40 ft or deeper and 60-ft wide or less. It is through these passes that a lot of water transfer occurs between the lagoon and open ocean.

Many of these reef passes are favourite dive sites, including: Eastern Blue Cut, Western Blue Cut, and Snake Pit. Turns out the pleasure divers had it right, as our research surveys over the past 4 years have shown that fish populations are much higher and there are more species found around passes than on the shallow rim reef spots between passes. Conversely, coral cover tends to be higher on the rim, with lower cover but more species found in the deeper passes.