Showing posts from November 5, 2008
Show all 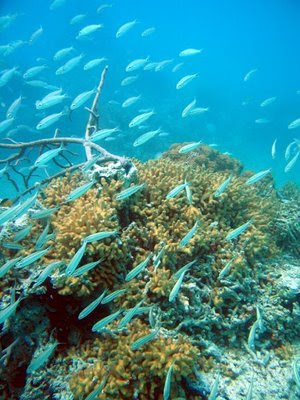 Within a couple of km of North Shore, in what many folks consider to be unappealing waters, are found hundreds for finger corals reefs that are actually thriving with life. These patch reefs, paradoxically fairly near both land and one of the large ship channels that cuts across the lagoon, are characterised by high coral cover and a high number of coral species.

Turbidity (suspended sediments) are also high in this area though, and head corals show signs of stress from constant smothering by sand. The finger corals (comprising 5 species of the genera Madracis and Oculina) provide refuge to thousands of tomtate (white) grunts, which in turn provide food for gray snappers and other predatory fish.

BREAM surveys have shown that many other species of fish also rely on these locally under-appreciated reefs as juvenile habitat, indicating the vital role these coral reefs play in maintaining the resilience of Bermuda's fish stocks.
Post a Comment
Read more

Rio Declaration on Environment and Development

- November 05, 2008
Bermuda, in it's Environmental Charter (link pdf), committed to do many things, including:

Action 11: Abide by the principles set out in the Rio Declaration on Environment and Development and work towards meeting International Development Targets on the environment.

Following is the text of the Rio Declaration on Environment and Development,
which can also be found at United Nations Environment Programme website (here)

Rio Declaration on Environment and Development
The United Nations Conference on Environment and Development, Having met at Rio de Janeiro from 3 to 14 June 1992, Reaffirming the Declaration of the United Nations Conference on the Human Environment, adopted at Stockholm on 16 June 1972, and seeking to build upon it, With the goal of establishing a new and equitable global partnership through the creation of new levels of cooperation among States, key sectors of societies and people, Working towards international agreements which respect the interests of all and protect …
Post a Comment
Read more
More posts