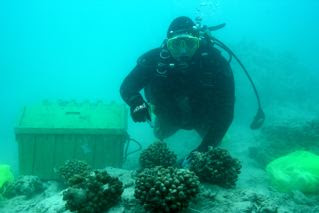 BREAM and the Bermuda Government Department of Conservation Services have been working together to transplant corals from an old sunken barge at Dockyard to restore a nearby coral reef damaged by a cruise ship grounding in 2006.

The 100-yr old wreck of one of the barges used to build the King's Wharf at Dockyard is located next to the new cruise ship pier. An RG article about the wreck can be read here: link.

While the wreck is deep enough to be left in place, except for a single spindle, or mast, the corals on the wreck are likely to be damaged by the currents generated by the ships' propellors and by the silt they kick up each time the ships approach or leave the pier.

For this reason we felt it best to remove the corals. The most suitable place to transplant the corals is the nearby reef that was struck by the Nordic Crown in 2006 [link].