Bermuda is bigger than you think 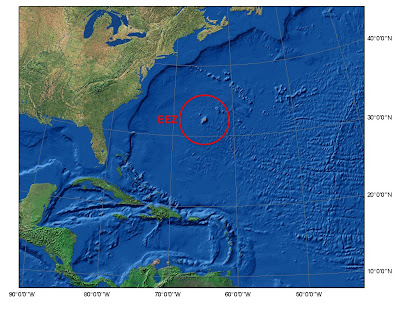 The boundary of Bermuda's Economic Exclusion Zone, out in the western North Atlantic.

Since 1996 Bermuda is not just a archipelago of islands surrounded by the shallow coral reef - but instead extends 200 nautical miles in every direction from the "baseline". The baseline includes the low-tide mark along the south shore, but then extends out and runs along the shallow rim reef on the north east to southwest sides of the lagoon.

Most of that is under water, of course - and about 12,000 feet deep or more! The seabed in our EEZ is not flat either, but studded with deep sea mounts, presumably of volcanic origin and probably covered in fish and benthic creatures.

The bathymetry of Bermuda's EEZ has been mapped, albeit at a low resolution.