- May 05, 2008
BREAM, as part of the Bermuda Biodiversity Project at BZS, has developed the most comprehensive maps of Bermuda's coral reefs and other marine habitats that exist. In this post we will describe how we mapped all of the 35,000 patch reefs in the North Lagoon of Bermuda.

Our goal was to create a Geographic Information System (GIS) of all the reefs found around Bermuda. A GIS is a computerized map that also contains information about each object mapped. Computerized maps are better than paper maps because once you put all the information you know into the program, you can then ask it to tell you new information which the program can calculate based on what you told it. Some questions you can ask a computerized mapping programme are listed at the bottom of this post.

Before we mapped the location of each reef into a GIS (also called a geo-referenced map database), we needed a set of images of the entire Bermuda reef platform. The BBP, with assistance from the Dept. of Conservation Services, commissioned an air plane to fly over the reef platform in a regular pattern , while taking geo-referenced photographs at regular intervals. Once the air plane landed the set of photographs was taken to a computer laboratory where the images were scanned in, and put together to form a mosaic. We sell a poster or mouse pad of this image mosaic of the island and surrounding coral reefs at the BAMZ Gift Shop. 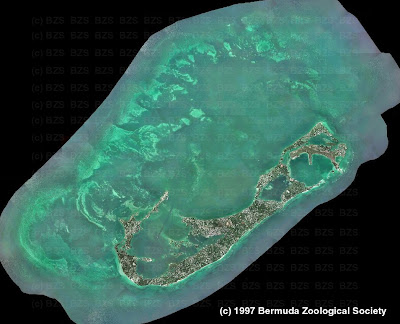 Mosaic image map of the island of Bermuda
and it's surrounding marine habitats. (c)1997 BZS.
Click Map to Zoom
Since the mosaic image was in a computer the exact location where each picture was taken on the Earth could be determined. This meant that we could then use the same images in a mapping computer programme and create a line map of each reef in a way that kept track of where each reef was located. As you can see in the image below, by zooming in on the aerial image until we can see each small reef (1), we can then draw a line around each reef (2), and in this manner create an image of the reefs that is a picture, not a photograph (3) 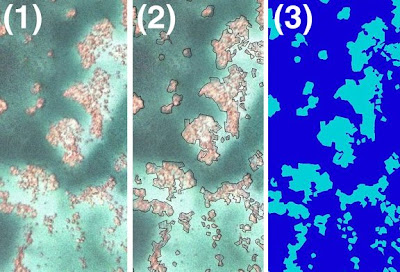 The three steps we take to map each reef from the aerial image.

We followed the same process across the entire image mosaic, until all reefs were mapped into the computer program. Now all the reefs are mapped we can make charts of the reefs, such as the one below. 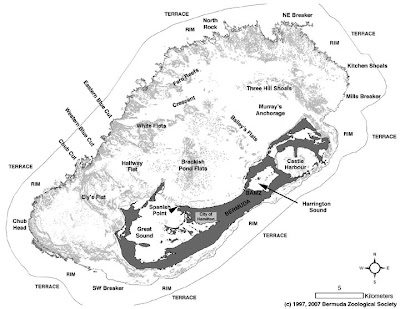 A chart showing the location of all 35,000 patch reefs
in the Bermuda lagoon. (c)2007 BZS
Click Map to Zoom
We can also use the same computer program to tell us things about the mapped reefs. For instance, we can ask the mapping program to tell us the following:
After mapping all the reefs in the computer, we then went out to lots of reefs and surveyed them to determine how many corals, fishes, sea urchins and other animals were on each reef. By going to lots of places we can then use the same mapping programme to produce maps showing how each organism is distributed across the whole reef platform. We will describe our maps of corals and fish in another post, coming soon...
bermuda coral reef mapping GIS aerial mosaic

Popular posts from this blog

- July 23, 2018
Here is a google map of all the Open Wrecks in Bermuda, as posted by the Bermuda Government Department of Environment and Natural Resources. I fixed a couple of location errors. Use at your own risk, of course.


More about Bermuda's ship wrecks can be seen at:

Clod cards are what?? 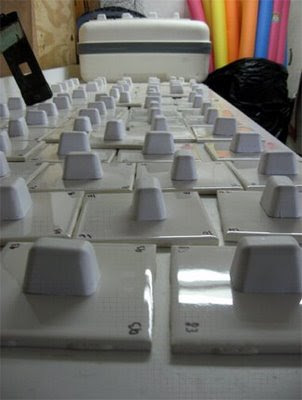 What are these? Fossilized marshmallows? White chocolate petite fours? No no…this is real science people!

This abundance of ice cube shaped trapezoids are nicknamed “clod cards”: a simple yet effective way to measure water movement as a proxy for current and flow exposure at underwater sites (developed by Doty et al., 1971).

The mechanism is straight-forward. These plaster of paris ‘clods’ are all identical in composition, shape and size. Each clod should therefore dissolve slowly underwater at a constant rate.

By weighing the dry clod cards before deployment, leaving them underwater for a fixed time period (usually between 24-48 hours) and then collecting them and re-weighing each clod, we can determine the precise weight of plaster of paris lost from each card. Clods losing more weight were exposed to greater water flow than cards exposed to less water flow.

I am a visiting…
Read more